How to Grade Your Pokemon Cards

What is Pokemon Card Grading?

Pokemon card grading is the process of getting the condition of your cards evaluated.

The better the condition, the higher the ‘grade’ they’ll get, which is typically a numerical score out of 10.

There are four key factors that effect the grade of your Pokemon cards:

This refers to how well centered the artwork on the card is. Grading services tend to be stricter with centering on the front of the card, compared to the back. They will also work off certain centering ratios to determine the grade of the card.

This refers to the condition of the corners. Anything like whitening, nicks, or unsymmetrical cutting can affect the grade of a card.

This refers to the condition of the edges of the card. Again, whitening, nicks and edgewear can affect the grade.

This refers to the condition of the surface of the card. Scratches, nicks print lines and even holographic bleed can affect the grade.

There are three established Pokemon card grading services that are widely accepted among collectors.

Note: All of these companies are based in the US.

Update July 2021 – PSA have been working over the past few months to tackle their huge backlog of cards to be graded. As of July 2021 they were able to open up their most expensive service for ‘Express Grading’. This costs $200 per card, and clearly, is only worth it for cards of considerable value. PSA has stated their commitment to reopening all services, but of course this is likely to take some time. You can read their latest update here: PSA Customer Update – July 2021 here. You can also view their earlier update here: PSA Customer Update – April 2021.

As of June 7th 2021, Beckett also suspended their grading services to tackle their growing backlog.

PSA run a simple grading scale from a ‘Poor 1’ to a ‘GEM MINT 10’. Details of their process can be found here.

Beckett has a more in-depth process, giving subgrades for the four key factors mentioned above. Their range runs from a ‘Poor 1’ to a ‘Pristine 10’.

Interestingly, they also have an elite level above that called a ‘Black Label Pristine 10’ for cards that score 10 for all the subgrades. As you can imagine, these cards are highly sought-after and valuable.

See here for more info on grading your Pokemon cards with Beckett.

CGC run a similar grading scale to Beckett going all the way from a ‘Poor 1’ to a ‘Pristine 10’. They also include subgrades on their cards. You can see their scale here.

As PSA is based in the US, international shipping can be an expensive and uncertain path for UK-based collectors.

Unfortunately, a very well trusted service here in the UK called Graded Gem, has ceased their relationship with PSA.

However there is another trusted company called Ludkins Collectables that I’m looking forward to using when PSA reopen for bulk submissions.

What to Expect From a PSA Return

When your cards finally come back, it’s really quite a rush!

Discovering the grades help you to identify the value of your cards, and whether you’re building a collection, or putting them up for sale, it means you take action!

Here is a recent PSA return of mine – check out these crazy grades…!

As demand for PSA, Beckett and CGC shot up massively this past year, the desire for alternative Pokemon card grading services increased.

Now I want to take this opportunity to say a massive shout-out to their entrepreneurs who took a risk, started their own grading companies and have a strong desire to serve the Pokemon community.

But, the big players have taken years to build their reputation among collectors, so this begs the question…

Should you wait for the likes of PSA, Beckett & CGC to reopen and speed up – or should you try these new grading companies that have sprouted up?

When to Hold Out For The Bigger Companies to Open

When to Try a New Grading Company

Ultimately, it comes down to you as a collector. If you like the idea of simply having your cards graded, protected and scored, then absolutely go for it and try these new companies.

But if you have cards that have high potential value, then I’d probably wait.

It is also worth noting, that you can grade your cards with these new companies, and then get them regraded with another company down the line.

So Who Are These New Pokemon Grading Companies?!

Below is a list of potential options for you.

I also reached out to them to provide a quote. I asked them to explain exactly what makes them different to the rest and why people should consider using them. This is what they said:

PCG Team: “At PGC (The Professional Grading Company), we grade cards in as little as 72 hours using some of the most advanced card case security features in the world. Our cases feature a long list of security features including gold holograms, watermarks, UV inks, micro text only visible under microscope, embossed gold foil and QR codes. Cards look incredible graded in PGC cases with our beautiful gold metallic labels. We are based in London and ship worldwide.”

Anthony Hickman: “I think it’s important to start with the elephant in the room. We love PSA and BGS just as much as the next collector.

We founded TFG on the core principals of integrity, professionalism and humility, fundamental values that are inherent with our Royal Marines heritage. Alongside a genuine passion for the hobby, we wanted to build a Grading Service based on these core principals.

We understand the narrative of ‘why use anyone else?’ and this has resonated with us from our conception. We want to challenge this and ask ‘why not?’. Our vision is to create an alternative that is viable, trusted within the community, accessible, engaging and innovating, offering a cost effective and efficient service with a competitive turnaround time. I have often wondered why such a progressive and established hobby, relies on the performance of two businesses, and the answer is because at this moment in time, they do what they do, better than anyone else.

To become a worthy challenger to the market, we had to focus on what we ultimately do, Grading. Our initial concept was designed around our own grading standards and how we could market a set of unique grades that do not follow the industry norms. We wanted to focus on minimising subjectivity of grades by establishing robust guidelines for each scoring criteria, we tested the formula, adjusted and I believe we have an extremely robust system that isn’t sheltered behind closed doors. Whilst we have essentially revealed our ‘secret recipe’, I think that this bolsters our integrity accolade by allowing the community transparency on how we grade. Alongside this we introduced the ‘Eyes On’ policy, a process that removes the single point of failure with two graders agreeing a score.

With a community focussed on collection, we wanted to create slabs that become desirable through their uniqueness and aesthetics. Choosing holographic foils, with an ink overprint was not the most cost-effective print option, but it added a dimension that we think not only looks great, but would resonate in the Pokémon community and become collectable in their own right. We have some very interesting and not yet seen developments for the business and we are extremely overwhelmed by the positivity shown by the community. We hope to be a trusted grading service for years to come and look forward to the journey ahead.”

“I founded Pokegrade in November 2020 initially offering a monthly card subscription service for £5.95 a month. With over 450 members, and after handling tens of thousands of Pokemon cards, I used the profits and invested into setting up a Pokemon specific grading company. Our Prices start at just £9.49 per card. We also give a further discount for bulk submissions of 30 cards and above. We also have a unique database so owners can verify their cards at cert.pokegradeuk.co.uk. We’ve already gained 25 5 star Google reviews in our first 90 days of operating and already been featured in Wired Magazine.

Each card is graded by two people at Pokegrade. Myself & my colleague Jano Omer have now personally professionally graded over 1700 cards since April this year. Our labels use materials made from the UK and Poland. They feature a security holographic logo on the front and tamper proof security sticker on the reverse. We also offer 2 labels. Our famous hot metallic blue border for grades 1-9. Then our gold metallic borders for 10s. We continue to listen to our 5500 Instagram followers and try to implement new ways of collecting whilst gaining more and more experience every day. Our goal is to become the number one recommended solution in the UK for grading Pokemon cards.“

Jake Kirkham: “We Launched Majesty Grading Company (MGC) in 2021 with the sole ambition to create a UK based Grading Service which would offer the TCG & Sports Card Collectors a safe and affordable service. We have achieved this by being the lowest priced UK grading company whilst leading the way in Anti-counterfeiting technology. Our Security measures include Microchips, Tamper proof Holographic designs, Customer Serial Number, hidden MGC Serial Number, UV security ink and most importantly MGC Secure tech™. Our cost effective grading package works out at just £9.99 per card with 2-8 week turnaround this also includes free UK tracked and Signed Delivery. “

Despite my efforts to contact Get Graded for a quote, I didn’t receive a reply.

This past year has seen unprecedented demand for Pokemon card grading services. As such wait times have never been longer.

Expect to wait over a year for the likes of PSA and Beckett. I’d expect CGC to be multiple months. But of course, these new grading companies can do it in a matter of weeks or even days.

Personally I believe the best view to take is that you are encapsulating an investment piece for the future. Try not to worry too much about the wait times 🙂

How to Submit Your Pokemon Cards For Grading

To ensure the safety and integrity of your cards’ condition, it’s recommended you submit your cards in the following way:

1. Put your card in a penny sleeve

2. Attach a post-it tag to the penny sleeve so it’s easy to pull out

3. Finally, put the penny sleeved card inside of a semi-rigid card holder

Important! Do not send cards in a toploader. The card can easily move around and may get damaged. 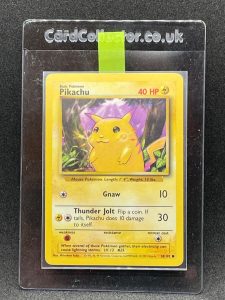 Conclusion: Is it Worth Grading Pokemon Cards

Whether you’re looking to increase the value of your cards, or simply protect them, I believe grading Pokemon cards is indeed worth it.

By ‘locking in’ or preserving a card’s condition you’re giving it the potential to be a sought after piece that many collectors will want to get their hands on.

Grading cards adds another level of rarity, and if you’re lucky enough to hold a desirable card, with a top grade, you just might be sitting on a shrewd investment.