There are few things that can transport you back to your childhood like Base Set Pokémon Cards from 1999.

Those are all great, but there is something indescribably special about Pokémon Cards.

‘Gotta catch ’em all’ – never has a catch phrase been so true.

Collecting Pokemon cards is addictive, and the chase of a Charizard makes grown men fall to their knees in jubilation… 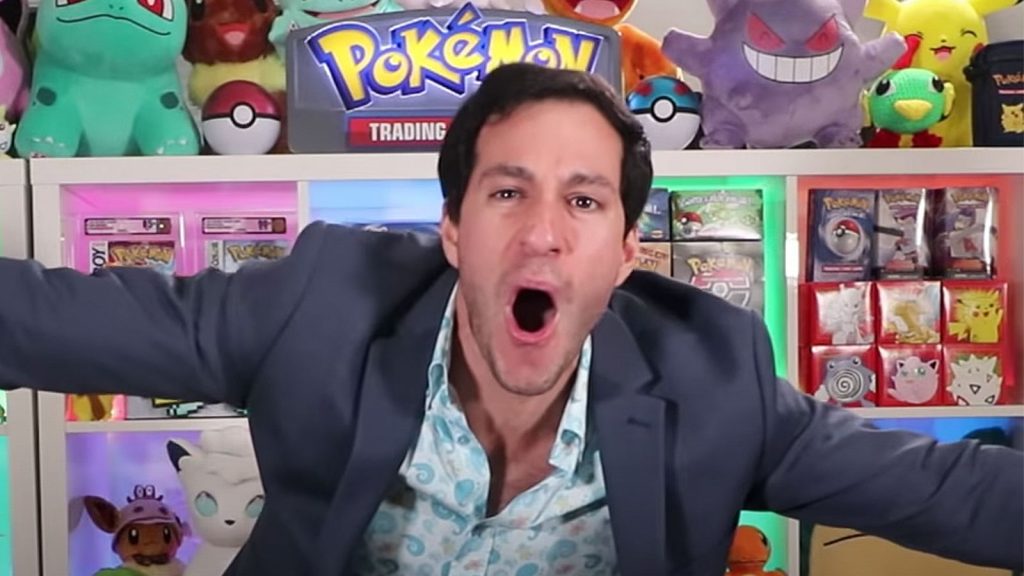 If you don’t already know, this is Leonhart, one of the best Pokemon YouTubers there is! And this is a still of his reaction to pulling a 1st Edition Base Set Charizard! The Pokemon community salutes you Leonhart – Here’s a link to his channel for epic content!

So if you want to know a lot more about why these cards have such an effect on people, you’re in the right place!

In this article, we’re going to breakdown everything you could possibly want or need to know about Base Set Pokémon Cards.

Let’s get into it!

How much are Pokemon Base Set Cards Worth?

Before we go further into the many intricacies of Base Set Pokemon Cards, let’s discuss values!

If you’re one of the many people who rediscovered their old collection this past year, you’re probably interested in how much it’s worth!

A lot has changed in the world of Pokemon since the late 90s, in fact, since then there have been over 120 sets released! And that number keeps climbing every few months.

So how on earth do we determine the value of your Base Set Pokemon cards?!

Well, there’s a few factors I want you to consider:

I regularly get valuation requests with dozens of pictures, hundreds of cards, in various conditions and from various sets!

As you can imagine, it is not easy slapping a valuation on it!

So, my best advice for people looking to quickly covert it into cash – put it on eBay and let the market decide.

Apologies if you’re looking for something a bit more detailed, but no collection is the same!

We’re not comparing apples with apples here, so take great pictures, show off your best cards (front and back) and let collectors come to you and bid (or make you offers). 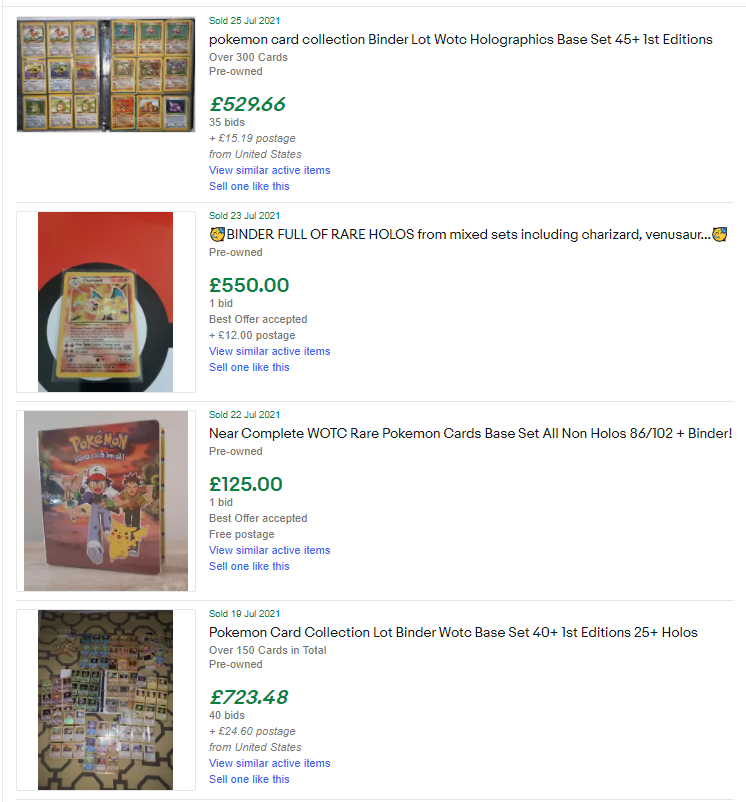 Another approach is to hold long term…

The Pokemon hype of 2020 has been and gone, and there have been significant re-corrections in the market.

Wait for another peak (say the 30th anniversary of Pokemon) and pull the trigger then.

That is my best advice.

For more detail on Pokemon card values, see the links below:

Hopefully these guides help you! Now for more info on Base Set, let’s take things back to the start…

When were Base Set Pokémon Cards Released?

Check out this old school commercial!!

How to identify Base Set Pokemon Cards?

Every set of Pokemon cards has what’s called an ‘expansion symbol’. This is some kind of small visual identifier to help you assign a card to a particular set.

However! As Base Set was the first ever set, it doesn’t have an expansion symbol.

This is how you can identify Base Set Pokemon cards!

How many cards are there in the original Base Set?

Pokemon Base Set consists of 102 cards.

How many different print runs of Pokemon Base Set are there?

It may surprise you to learn that there were actually 8 different print runs of Base Set!

Before we go into what they were, let’s define a ‘print run’…

In a nutshell, the cards in the set are the same, but they’ve changed a characteristic on one or some of the cards. For example, they fixed a design error.

So, here are the eight…

Wait, what?! Aren’t you missing 1st Edition Base Set?!

Interestingly, the cards were stamped with the 1st Edition symbol after the print run – fun fact!

Often incorrectly labelled the ‘UK Print’ (as they were also printed in the US and Australia too), the final print run of Base Set had a new copyright date added to the bottom and the colour is slightly paler than before.

Famously, they also corrected Vulpix’s HP error which had somehow slipped through the previous seven print runs! All the way until 1999-2000 Base Set, Vulpix’s Hit Points read ‘HP 50′ instead of ’50 HP’! Very subtle of course, but it makes the corrected card a bit more sought after.

A simpler approach to Base Set Variations

Now, although my guide above is technically correct, it may not be entirely helpful to you – especially if you’re just getting back into Pokemon and trying to learn the ropes!

So let’s break the Base Set cards down into three variations for the sake of this article, and your understanding of the cards…

1st Edition and Unlimited are pretty self-explanatory, but people often get a bit confused regarding Shadowless Pokemon cards (totally understandable!)

If you want to do a bit of extra reading I’ve written a handy guide to Shadowless Pokemon cards here.

Once upon a time, a Pokemon Base Set booster box cost around £144. Now, 1st Edition boxes sell for north of £300k!

Aside from the cards themselves, sealed Base Set booster boxes are some of the most desired items in the hobby.

Let’s explore some of the different variants, estimated values of how you can spot fake copies. 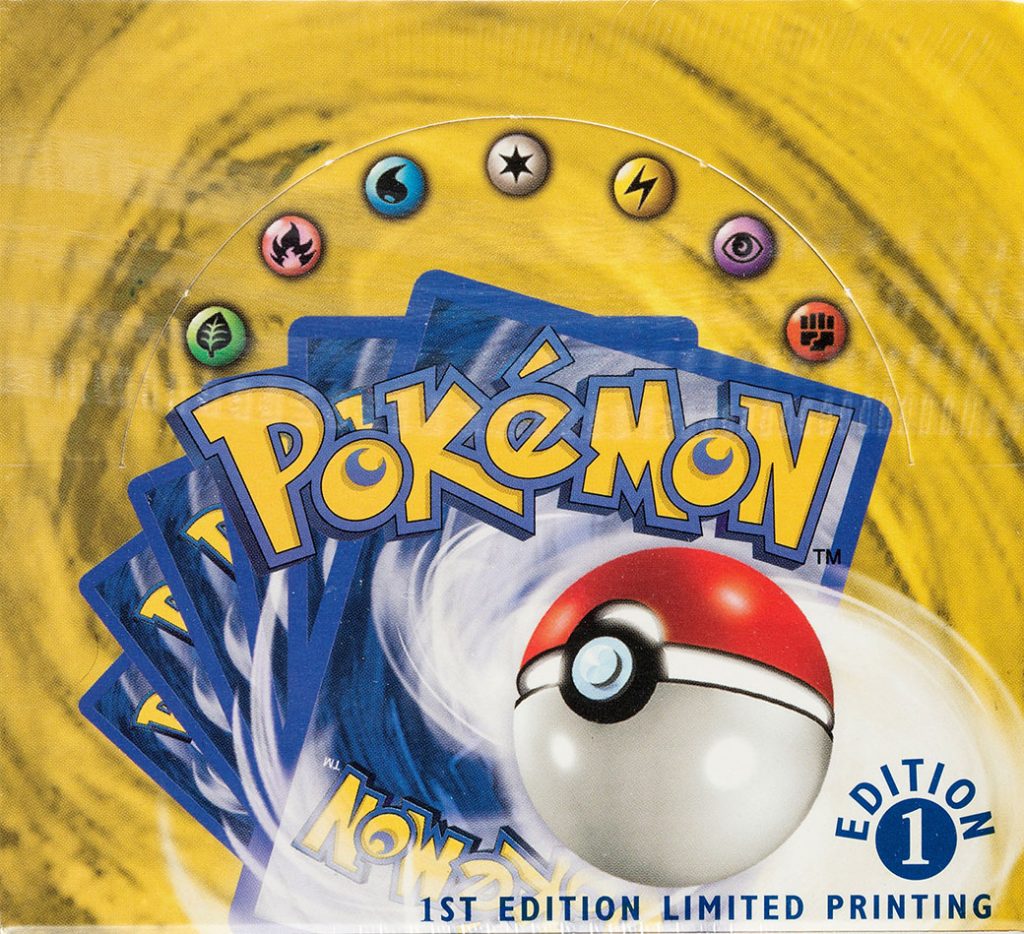 By far the most valuable as these are the first ever printed English Pokemon cards.

The boxes are easy to spot as they have a 1st Edition Stamp on them and the text ‘1ST EDITION LIMITED PRINTING’.

Important – 1st Edition boxes do not have the Wizards of the Coast logo printed on the cellophane wrapping. Stay well clear if you spot a box being sold with this – it’s fake. 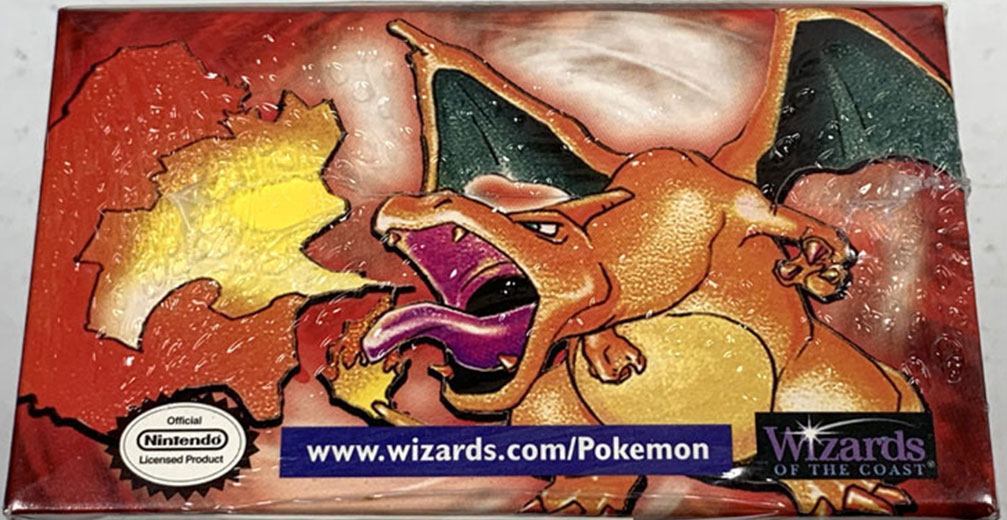 Still very valuable and ultra rare, Shadowless booster boxes are harder to identify as there is no ‘shadowless’ labeling or anything of that nature.

Instead characteristics of the box (such as there being a ‘green-winged’ Charizard on the side), and very carefully being able to identify the packs within (without impacting the seal) is the way of identifying whether a box is shadowless or not.

This guide goes into great detail on identifying a shadowless Base Set booster box.

Although this is the most commonly found Base Set booster box variant, it’s still no chump change!

As more and more boxes are opened on YouTube etc, I’d expect the value to continue to creep up long term as supply dwindles.

By default, a box that isn’t 1st edition or shadowless will be ‘unlimited’.

How to Spot Fake Base Pokemon Set Booster Boxes

It’s a shame we have to even include a section like this, but the reality is there are people out there looking to scam the community and make a quick buck.

If you’re serious about investing in sealed vintage Pokemon products, I implore you to educate yourself on how they should look and feel.

Do your research by looking at boxes sold by trusted auctioneers like Hertitage Auctions or PWCC.

Study the colours, the wrapping, key identifiers on the box. Then cross-reference that with item your considering. If anything doesn’t add up, err on the side of caution.

Because of the different box variants it’s hard to provide specifics, but here are my general rules for spotting fake Pokemon booster boxes:

In my opinion, it’s better to be safe than sorry, especially with such valuable items. Plus if you plan to buy and keep sealed, you don’t want a nasty surprise if you crack the hood many years from now!

Next, let’s drill down to Base Set booster packs!

Just like booster boxes, they can be identified with simple visual cues.

But before we go into that, I just want to explain a term you may or may not have come across…

What is a ‘Heavy’ Booster Pack

Basically, some smart Alec realised a long time ago that packs with a holographic card weigh more!

Generally speaking, the pull rates of a holo are 1:3 packs, therefore you can simply weigh the packs, extract the valuable items and flog the rest.

Not exactly fun or ethical right?!

But, that’s the game I guess when a lot of money is at stake.

It’s important to know this for two reasons:

Anyway, let’s get into the different pack variants… 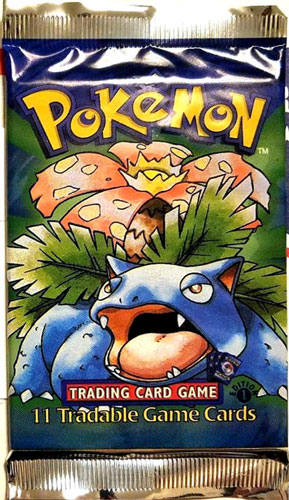 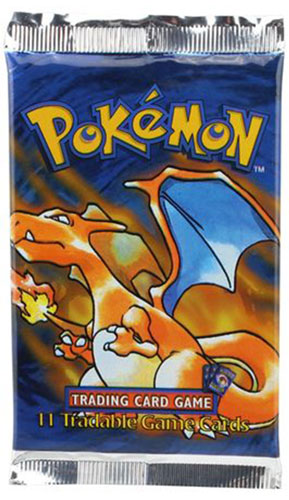 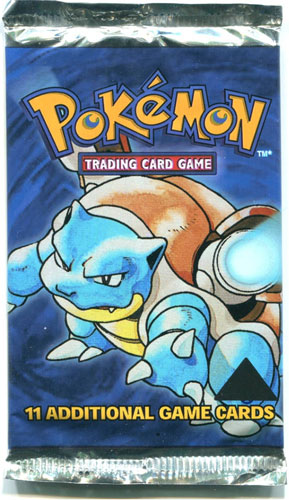 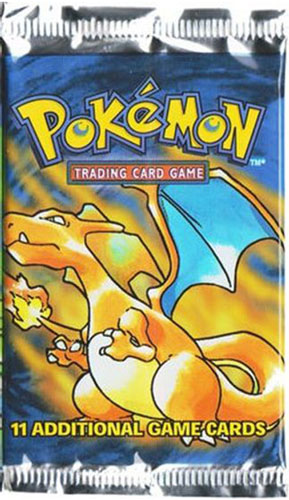 Now we can’t talk about Base Set without talking through the theme decks!

Back in the day they were called ‘Preconstructed Theme Decks’ and specially designed for players of the TCG in mind.

As the name suggests, each deck had a ‘theme’ and players could use the decks with a specific strategy in mind for gameplay.

What are The Base Set Theme Decks Called?

There are 5 theme decks in Base Set, they are called: 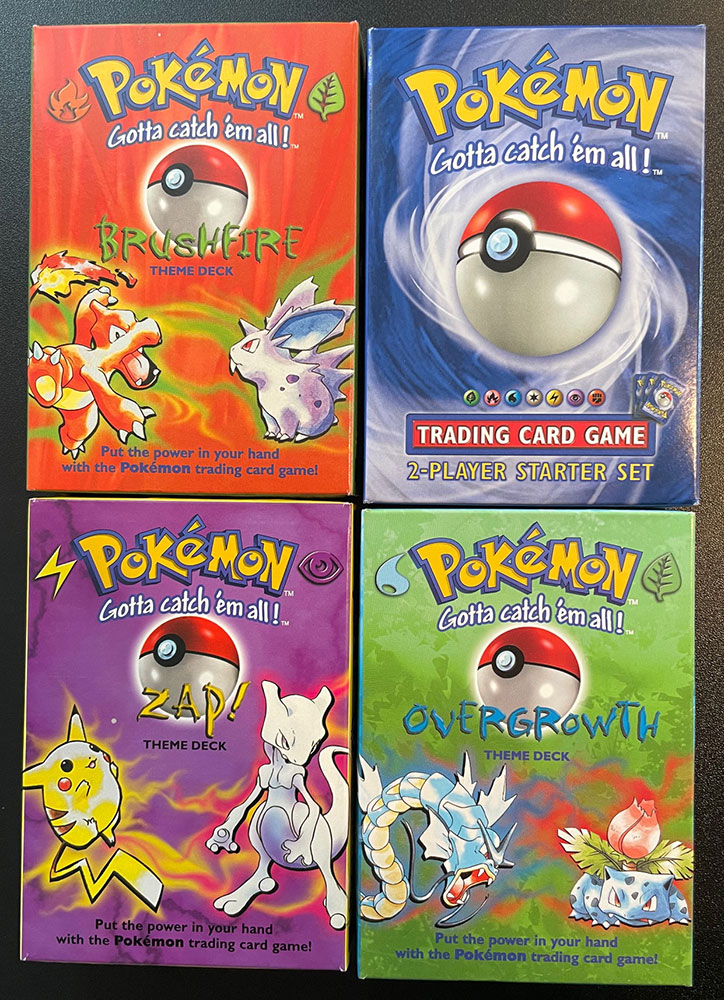 Is it Worth Buying Base Set Theme Decks?

Although Theme Decks are pre-constructed, meaning you know what cards are inside, I love to buy sealed Base Set Theme decks.

I buy sealed, open and grade the best cards.

Sure it doesn’t have the lottery-style fun of opening a random base set booster (which has possibly been weighed), but it’s certainly a more sensible way to spend my Pokemon budget!

Did you know there are over 40 different error cards from Base Set!

This is brilliant because they are highly collectible, fun to chase, and extremely rare in some cases.

However questions do have to be asked surrounding quality control checks back in the day!

No ultimate guide to Base Set would be complete without a full card list! So here’s a handy table of each card, it’s number in the set and its rarity:

It’s very hard to sum up what Base Set means to collectors.

Sure, it’s the starting point of an iconic hobby. The cards are very valuable in monetary terms and it’s a solid alternative investment for the future.

But it’s also so much more than that…

I (like many others) also like to think of the cards as a time machine back to my childhood!

There are few things in this world, pictures aside, that can transport us back to a moment in time, but Pokemon cards have this indescribable way of doing it.

You look at that holographic Charizard and there’s just something magical about it.

120HP, a devastating Fire Spin, a giant crease down the middle and you’re king or queen of the playground!

The cards are just so memorable and have a subtle charm that just makes you want to show them off.

As a collector, I think the way Pokemon continues to reinvent card designs after 25 years if very impressive.

The full arts, the rainbow rares, the border popping ‘amazing rares’ – they continue to produce cards that I want!

But, for me, nothing is better than Base Set and I hope this article shows just how interesting of a set it is and how much I love it!

Quick disclaimer! It goes without saying, this article is not investment advice! I’m merely sharing my opinion. You are responsible for how you spend your money!